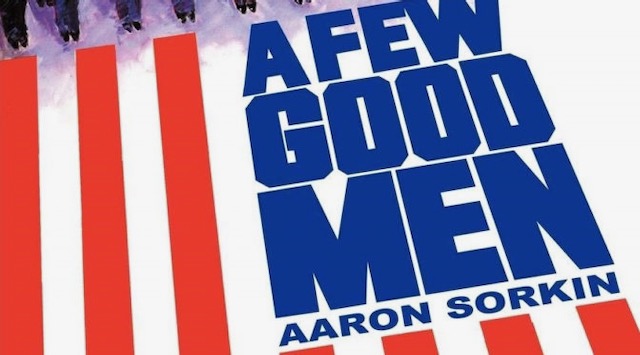 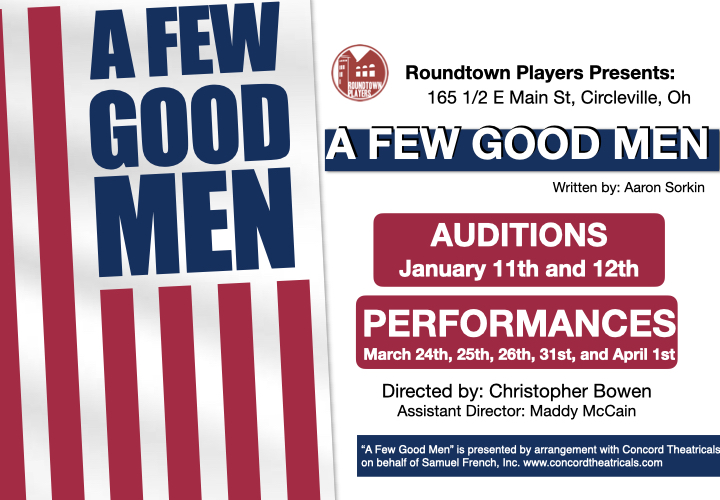 January 3rd, 2023, Circleville, Ohio – Roundtown Players Theatre, a community theatre now in its 56th year, has announced its first show for 2023, “A Few Good Men.” The two-act play, written by Aaron Sorkin, will have group auditions on January 11th and 12th at 6:00 pm, with performances beginning March 23rd and running through April 1st.

“A Few Good Men” is a courtroom drama that tells the story of a group of military lawyers assigned to defend two Marines stationed in Guantanamo Bay, Cuba, and, during the course of the trial, they uncover a high-level conspiracy designed to eliminate weaker soldiers in the name of patriotism.

If you don’t know the play, you may be familiar with the 1992 movie of the same name. The film adaptation, which was also written by Aaron Sorkin, had a star-studded cast that included Tom Cruise, Demi Moore, Jack Nicholson, Kevin Bacon, and Kiefer Sutherland. And, if you’ve seen the film, you have a pretty good idea of what you’re going to get with the play.

This production new will be the first play at Roundtown Players to be directed by Christopher Bowen.“Sorkin is one of my favorite writers. He has the unique ability to create complex drama while also finding humor,” Christopher shared while speaking about the project. “Plus, the play’s core values of service, honor, and loyalty ring true for me.”

Christopher, a resident of Pickaway County and a military veteran, has enlisted the talents of Maddy McCain as assistant director. Maddy, a daughter of a navy veteran, is no stranger to Roundtown Players and has been involved both on and off stage in all three of the theatre’s 2022 productions.

Although “A Few Good Men” is conventionally cast as 14 males and 1 female, the directors intend to bring a different approach, offering roles to the best actor or actress regardless of gender. When asked about having women play some of the traditional male roles, Christopher Bowen was quick to say, “We have such a vibrant and talented group of female actors in our community, and it would be a missed opportunity not to get them involved and bring their talents to this production.”

As with every production at Roundtown Players Theatre, the public is welcomed and encouraged to audition, regardless of their acting experience. The team is also looking for off-stage assistance in the roles of Technical Director, Stage Hand, Prop Maker, and Costume Design.

Tickets are now on sale for ‘You Can’t Take It With You.”

Advanced tickets are available online and at the Box Office on the day of the show.

Synopsis: The family of Martin Vanderhof lives “just around the corner from Columbia University—but don’t go looking for it.” Grandpa, as Martin is more commonly known, is the paterfamilias of a large and extended family: His daughter, Penny, who fancies herself a romance novelist; her husband, Paul, an amateur fireworks expert; their daughter, Alice, an attractive and loving girl who is still embarrassed by her family’s eccentricities—which include a xylophone player/leftist leaflet printer, an untalented ballerina, an African American couple on relief, and ballet master exiled from Soviet Russia. When Alice falls for her boss, Tony, a handsome scion of Wall Street, she fears that their two families—so unlike in manner, politics, and finances—will never come together.

During a disastrous dinner party, Alice’s worst fears are confirmed. Her prospective in-laws are humiliated in a party game, fireworks explode in the basement, and the house is raided by the FBI. Frustrated and upset, Alice intends to run away to the country, until Grandpa and Co.—playing the role of Cupid—manage not only to bring the happy couple together, but to set Tony’s father straight about the true priorities in life. After all, why be obsessed by money? You can’t take it with you…

“You Can’t Take It With You” is appropriate for all ages.

Please keep an eye on our Facebook page for the most up-to-date information!

We ask that all guests observe common sense health guidelines.  Recommendations can be found on the Center for Disease Control’s website here.

“You Can’t Take It With You” directors announce the cast for the November 2022 show!

Chuck and Heather Bennett have been hard at work on their new production of “You Can’t Take It With You” by George S. Kaufman and Moss Hart. With the cast now set, rehearsals have begun.

The play will be performed on two weekends this November at Roundtown Players Theatre. Find out more

Want to get your name on the next cast list? Check out our upcoming auditions

Get your tickets online before we sell out: